Give Zakat, Sadaqah, and Waqf easily on our award-winning platform. Join thousands of others as we create positive change together. Browse campaigns from around the world. Start here.

The Significance of Performing Umrah during Ramadan 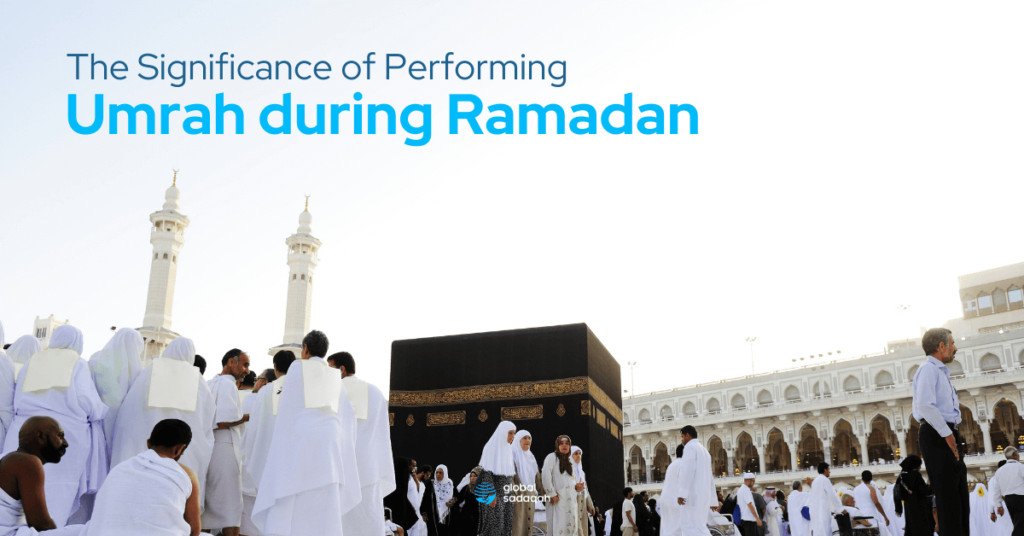 Thousands of pilgrims flock to the holy lands to undertake Umrah during the month of Ramadan. Umrah has a specific place and religious significance for all Muslims, and throughout the holy month this significance actually intensifies.

Individuals congregate every year all over the world gather in the time of Ramadan to fast and conduct Umrah, making it a truly enlightening experience. All with the hopes of gaining Allah’s ultimate approval.

Let’s take a look at the advantages and rewards of completing Umrah during Ramadan, starting  with the main reason for performing Umrah.

Related: The Psychology of Self-Control in Ramadan

The rewards of Umrah during Ramadan are multiplied

Umrah, or smaller pilgrimage, is a Muslim act of worship that entails visiting the holy Ka’abah at Makkah’s Masjid Al-Haram. It gives you the chance to renew your faith, seek forgiveness for your misdeeds, and deepen your relationship with Allah.

In the Islamic calendar, Ramadan, on the other hand, is considered the holiest month. The first few revelations of the holy Quran were revealed during this month. Muslims observe mandatory fasts from sunrise to sunset throughout the month, as well as exerting self-control, maximising their acts of prayer, and more dutifully observing Islamic teachings.

Consider the benefits you’ll receive from Allah if you combine the two types of worship outlined above, or if you perform Umrah during the holy month of Ramadan.

Millions of Muslims flock to Makkah every year to seek refuge in Allah, seek forgiveness, atone for their sins, and pray for happiness and prosperity. The congregation at Umrah is definitely a sight to witness as they conduct the prayers together.

Pilgrims leave everything negative behind and commit themselves to Allah’s service and adoration during this spiritual journey.

They dedicate themselves to become better human beings by cleansing their mind, body, and spirit. It is thought that anyone who does Umrah with good intentions and a grateful heart obtains Allah’s ultimate pleasure.

The rewards of Umrah is equal to Hajj

In Ramadan, Umrah is the counterpart of Hajj because there are narrations that point directly to Umrah being of equivalent significance to Hajj during the time of the Holy month.

Ataa reported:I heard Ibn Abbas narrating to us that Allah’s Messenger (ﷺ) said to a woman of the Ansar: ‘What has prevented you that you do not perform Hajj along with us? She said: We have only two camels for carrying water. One of the camels has been taken by my husband and my son for performing Hajj and one has been left for us for carrying water, whereupon he (the Holy Prophet) said: So when the month of Ramadan come, perform Umrah, for Umrah in this (month) is equal to Hajj (in reward). [Muslim]

The Prophet of Allah ﷺ) said (to her), “Perform umrah in the month of Ramadan, (as it is equivalent to hajj or hajj with me (in reward).” [Sahih Bukhari – Book 29, Hadith 86]

Who is eligible to perform Umrah during Ramadan?

In normal conditions, any Muslim would be permitted to perform Umrah during Ramadan and all the benefits that come with it. Only immunised pilgrims were allowed to enter Makkah to do Umrah in the most recent Ramadan due to COVID-19-related concerns.

According to a local publication, Saudi officials have limited the number of necessary permits for umrah or lesser pilgrimage in the last ten days of the current holy Islamic month of Ramadan to first-time pilgrims in an effort to reduce overcrowding.

Permits to do umrah in the final days of Ramadan at the Grand Mosque in the holy city of Makkah are available to worshipers who did not get such permits earlier in the sacred Muslim month, according to the Ministry of Hajj and Umrah.

When performed during Ramadan, what does Umrah entail?

While there are various benefits to completing Umrah during Ramadan, one of the most encouraging is that doing it during this holy month makes the practise equivalent to Hajj.

As a result, once Hajj becomes obligatory (fardh) for you, you must make it a top priority and execute it. Following that, you can always consider undertaking Umrah during the auspicious month of Ramadan to receive Hajj-like gifts, which will be nafl (voluntary).

The following are the basic steps of Umrah:

• Wash your body and put on Ihram clothing to enter Ihram (a state of purity and dedication).

• At the miqat station, recite the Talbiyah to express your intention to make the pilgrimage.

• Make a pilgrimage to Makkah.

• Walk seven times between the hills of Safa and Marwah beside the Kaaba to perform Sa’ay.

• Men quit Ihram by shaving their heads at the completion of Umrah (taqseer). For women, completing Umrah necessitates cutting off a strand of hair.

While this pilgrimage can be performed at any time of year outside of Hajj, international pilgrims must obtain Umrah visas and travel with licensed tour operators. Umrah does not require any extra licences for Saudi and GCC citizens.

Islam is a religion that offers unlimited mercy in the form of rewards and opportunities for rewards in all shapes and forms. It is important that we as Muslims understand and acknowledge the importance of Umrah during the month of Ramadan, so that we may capitalise on such an incredible advantage.

You may also want to read:

We’ll only email you valuable content and the latest updates. No spamming, that’s our promise.

9 Sunnahs of Eid You Can Revive This Shawwal

The Differences between Zakat Al Mal and Zakat Al Fitr

5 Tips to Survive Your First Ramadan

The Virtue of Sabr in Ramadan